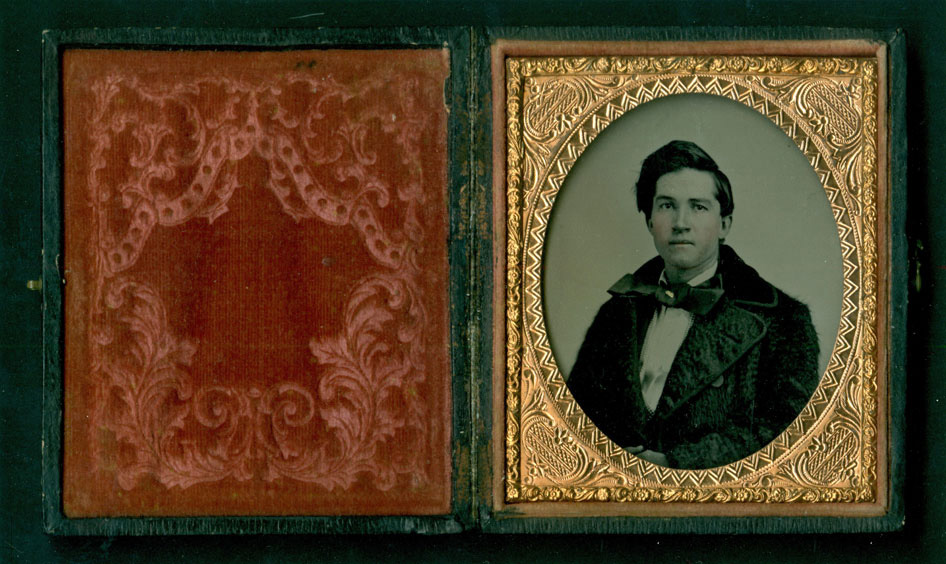 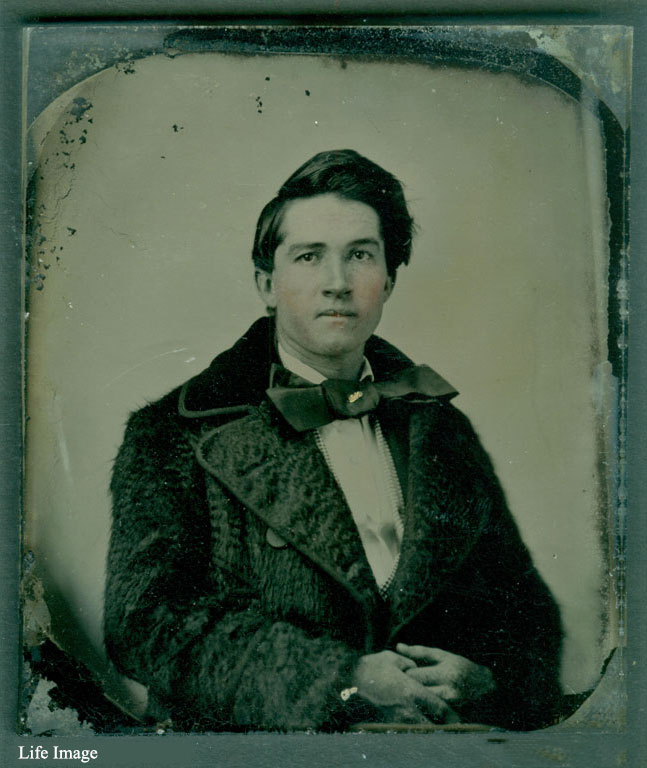 “A modern black paper has been inserted to back the alsphaltum varnish on the plate verso. However, the case, mat, preserver are original.

Note the well defined Intertragic Incissure (the groove between the Tragus and Antitragus).

When I first saw this image, as well as later when I was able to examine a photographic enlargement of the plate, I recall saying that I judged his age to be 18 years.

I mentioned that to Grant Romer, and asked him to comment. Grant said, “Students of 19th Century photography note the phenomenon that modern viewers tend to over-estimate the age of sitters, and that when the real date of a sitting can be determined, it turns out that the subject was younger than suggested.”

The good folks at the Thomas Edison Papers of Rutgers University brought an apparently rare photograph of Thomas Edison, age 16, to my attention. While this photograph does not provide any facial identification landmarks, it helps solidity the earlier estimated age 18.

If Edison, born in 1847, was 18 years of age when this ambrotype was made, the year would  have been 1865.  Please note what appears to be a wrist watch.  If this is a wrist watch, and the image was made in 1865, young Thomas Edison was wearing one of the very first wrist watches, pre-dating by three years the introduction of the first Swiss wrist-watch.

The following video has been produced by Bob Schmitt, the co-founder of Biometrica, Inc, which provides biometric facial identification security to casinos. All individuals who enter a Biometrica-covered casino are unobtrusively photographed, and compared to a large database of persons who for different reasons are not welcome patrons. He is one of the pioneers and leaders of the biometric facial identification industry.

“We do not know a millionth of one percent about anything.”

This is beautifully made. It is technically flawless. The time is likely the Fall of 1865; Edison would be 18 years of age. The housing is in superb condition. All is original.

I deplore Edison. He was a horrible man. He electrocuted an elephant. On the positive side we must admit his brilliance. No matter his brilliance, and his contributions to society, morally, he was of the gutter.