This enlargement print of the sixteenth size daguerreotype plate (1.375 by 1.625 inches) is the highest quality reproduction possible. It was made by Michael Hager of Museum Photographics, Rochester, NY. Mr. Hager, a member of the faculties of the George Eastman House and the Rochester Institute of Technology, is a recognized photographic printing authority. His company specializes in such services for museums, libraries, historical societies, and private collections. 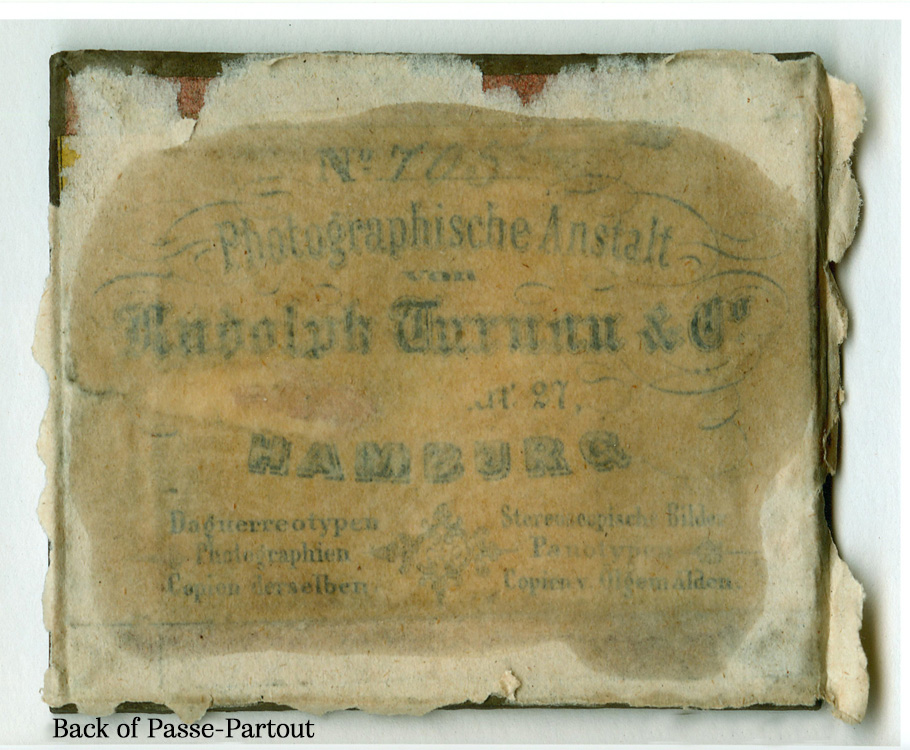 Rudolph Turnau & Co., Neuerwall No. 27, Hamburg, is mentioned, with the date, May, 1855 in Prof. Wilhelm Weimar’s 1915 publication, “Die Daguerreotypie in Hamburg”.

I draw the viewer’s attention to the subject’s right side where there appears to be a tiny tuff of neck hair. And on both sides of his face there appears, faintly to be sure, what appears to be sideburns which we known from later images extend below the mandible to the neck hair. However, with a high degree of clarity the viewer can note other aspects that are identical to those of his known photographic images: the philtral columns; labial commissures; cupid’s bow; and lower lip; the nose is perfect; his right ear is good; the head hair is, at the very least, consistent. The eyebrows are unclear. The way they lay, however, is excellent.

Please note the bow tie in the first drawing, to be compared to the bow tie of the daguerreotype image. Generally, men make their ties the same way day after day, a lifelong repetition. Lastly, consider his vest, its construction, lay, and relationship to the rounded suit coat lapel, all favorably comparing to later images.

Very few people realize that the first photographic methodology, the daguerreotype, is the supreme quality of photographs. There is no higher quality photograph than the daguerreotype. I quote Grant Romer of the George Eastman House: ”The Rolls Royce is the daguerreotype of automobiles.” A well-made daguerreotype can seem to have magical qualities. Highly polished silver is the best reflector known. When holding a daguerreotype, and moving it ever so slightly in order to get the perfect light reflection, an occasionally heard comment is that the viewers felt themselves “ transported” to that time and place.

Another point deserves mention here. One can, with ease, using the latest computer technology, scan the daguerreotype plate. Or one can use traditional photographic reproduction methods. No matter. It is impossible to perfectly reproduce the reflection of the daguerreotype plate. No matter the quality of the resultant print, it cannot capture the clarity, the quality, of the original.

The daguerreian caught the dimple. It seems to me entirely possible that later photographic images, all of which used lesser quality methodologies, did not.

Please note what appears to be a chin cleft or dimple in the 1843 painting of Richard Wagner by Ernst August Becker, the 1850 pencil drawing by Ernst Bendikt Kietz, and the 1850 drawings by Rudolf Lehman. 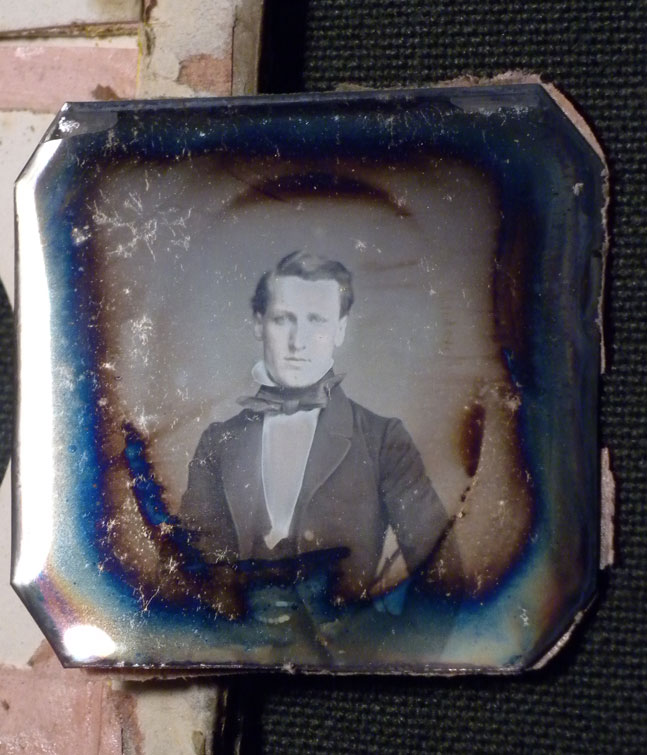 The hands you see are those of Grant Romer.

“The technical quality of the daguerreotype is not very high. It is slightly out of focus, tonally flat, and overexposed. This puzzled me since a studio photographer in the mid-1850s, capable of working both the daguerreotype and collodion processes (see the label for Turnau’s offerings) should have been able to produce a better daguerreotype. However, copying daguerreotypes presented unusual difficulties, and did not always equal the studio standard of direct camera work. The characteristics of this daguerreotype are commensurate with copy daguerreotype work.” Grant Romer

Accordingly, it appears that Hamburg daguerreian, Rudolph Turnau, was not the original maker. Rather, he made one or more copies of the likely 1844 Hamburg original. As Richard Wagner was well known in the mid-1850s, it is entirely possible that Turnau made a few copies. If any other examples are extant it is likely they will be in Germany. Perhaps if this image of young Richard Wagner is publicized in Germany, one or more additional copy daguerreotypes will come to the surface. It is even possible that the original is extant! Both original and copies would be sitting unrecognized in private or public collections of daguerreotypes, or merchants’ inventory.

The following video has been produced by Bob Schmitt, the founder of Biometrica, Inc, which provides biometric facial identification security to casinos. All individuals who enter a Biometrica-covered casino are unobtrusively photographed, and compared to a large database of persons who for different reasons are not welcome patrons. He is one of the pioneers and leaders of the biometric facial identification industry.

“When first it dawned on human wisdom that the same thing breathed in animals as in mankind, it appeared too late to avert the curse which, ranging ourselves with beasts of prey, we seemed to have called upon us through the taste of animal food: disease and misery of every kind, to which we did not see mere vegetable-eating men exposed. The insight thus obtained led further to the conciousness of a deep-seated guilt in our earthly being; it moved those fully seized therewith to turn aside from all that stirs the passions, through total abstinence from animal food. To these wise men* the mystery of the world unveiled itself as a restless tearing into pieces, to be restored to restful unity by nothing save compassion.”

As Lincoln is to the United States, Richard Wagner is to Germany. He is their greatest son. Thus, the copy-daguerreotype of Wagner at age 31, will surely be, to Germany, the holy grail.