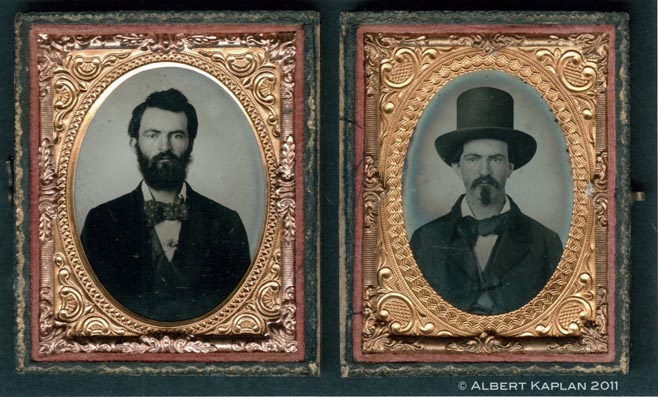 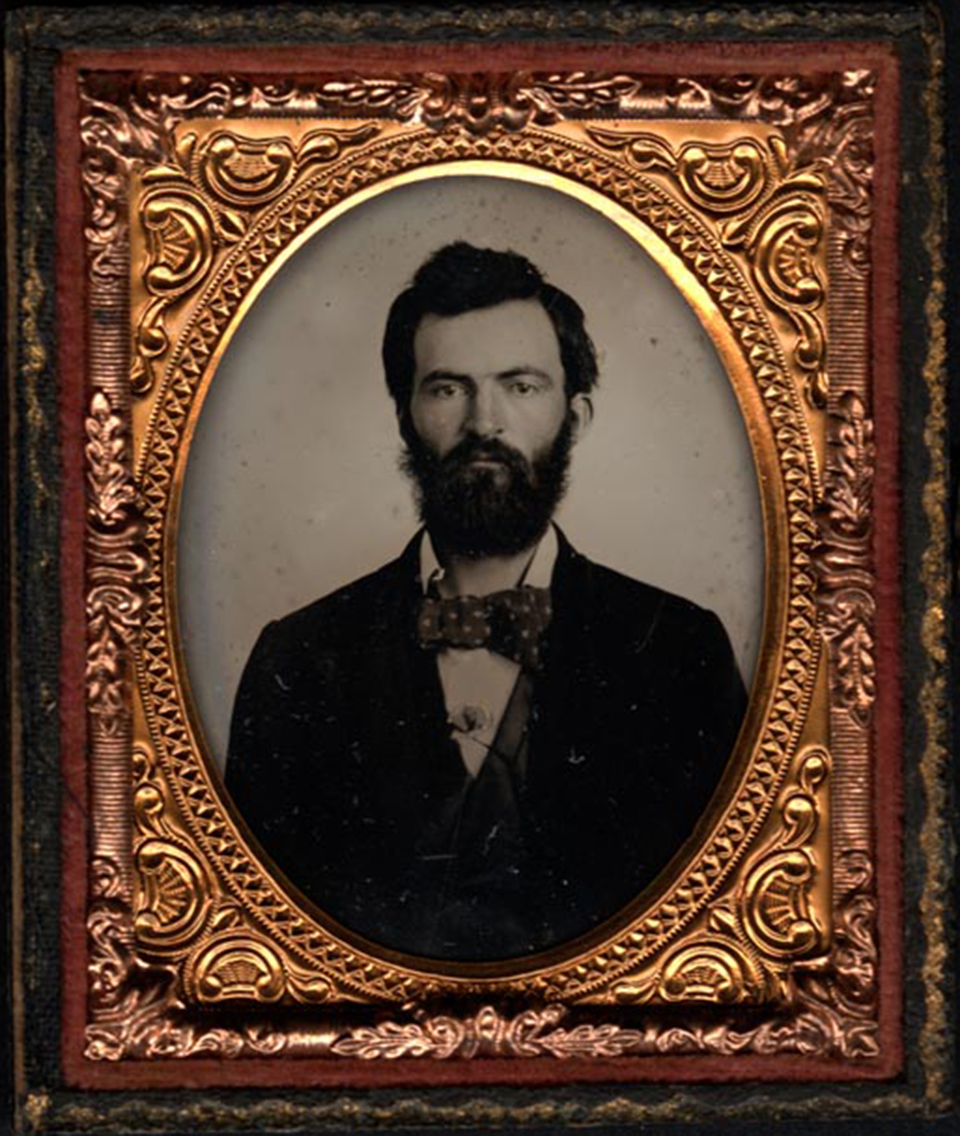 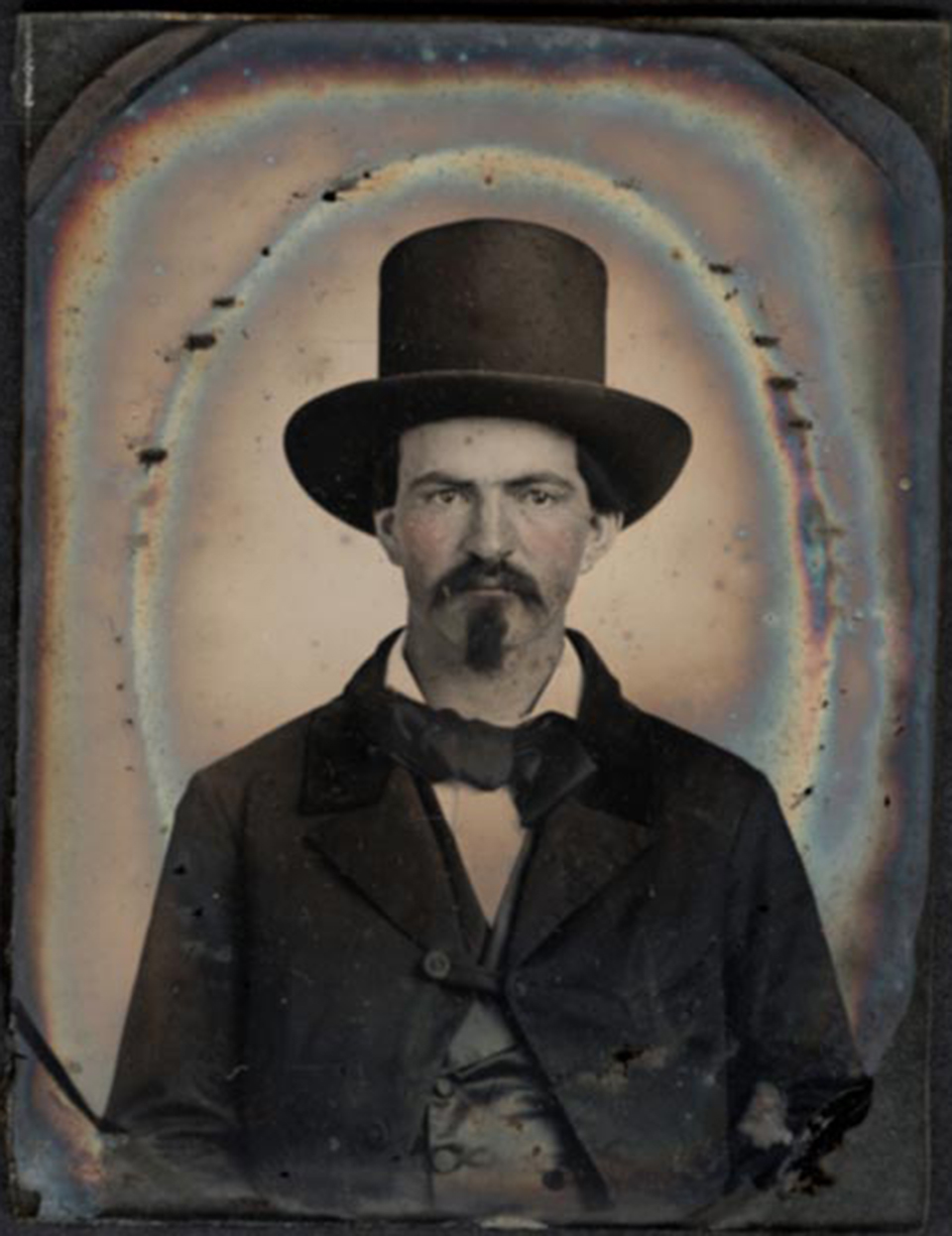 When I first saw this double image ambrotype, my attention was drawn to the young man wearing the stovepipe hat. I had the impression that he must have a good sense of humor. As there were many more images to examine, I continued to proceed in my review of the collection presented to me.

I recall having come back to the image of the young man with the stovepipe hat at least half a dozen times over the next few days. In retrospect I think that there was a faint mental connection between the face of the young man in the stovepipe hat and that of an known older man. And yet I did not connect either ambrotype image to Samuel Clemens. Why then, did I keep coming back to the double ambrotype images? I reasoned that there was something there, but I could not figure out what it was.

It may interest the viewer to know that I was instantly or near instantly able to recognize all the other images in the collection except these two images of Samuel Clemens. With these two images it took, as I recall, four days and half a dozen visits.

Upon opening the case one views two distinct images: a young mustached man wearing a stovepipe hat; the other image is of a young man with beard. Close comparison between the two images leaves no doubt that we are viewing the same man. In comparing these images to the known 1851 Samuel Clemens image shown here, I especially draw the viewer’s attention to the eyebrows and head hair. The eyebrows are identical, and the head hair is essentially identical. Also, notice the discreet hairs in the glabellar region (between the eyebrows, above the nose). The nose is perfect. The moustache is very good; the bone structure very good; the small portion of the upper lip that is visible, is very good. The bow tie is good. We cannot tell whether the lobule of the ear is attached or free hanging. Samuel’s lobule was attached. However, we can clearly see that the Helix and Antihelix are identical.

The Utah collector from whom I purchased this ambrotype told me that he acquired it from a fellow collector in Nevada. Samuel and his brother, Orion, arrived in Nevada in 1861. Accordingly, it seems likely that this ambrotype was made in Nevada around that time.

Nevada Territory in 1861 was surely not the venue for formal dress and top hats! … excepting a rare occasion calling for such attire. I think it likely that the occasion was directly related to Orion’s appointment by President Lincoln as the Secretary of Nevada Territory, an office similar to that of the Governor of a State.

That he had a beard during this period is confirmed in his letter to his sister, Pamela. “Some people are malicious enough to think that if the devil were set at liberty and told to confine himself to Nevada Territory, he would come here and look sadly around awhile, and then get homesick and go back to hell again. Why, I have had my whiskers and mustaches so full of alkali dust that you’d have thought I worked in a starch factory and boarded in a flour barrel.”

“Clothes make the man. Naked people have little or no influence on society.”