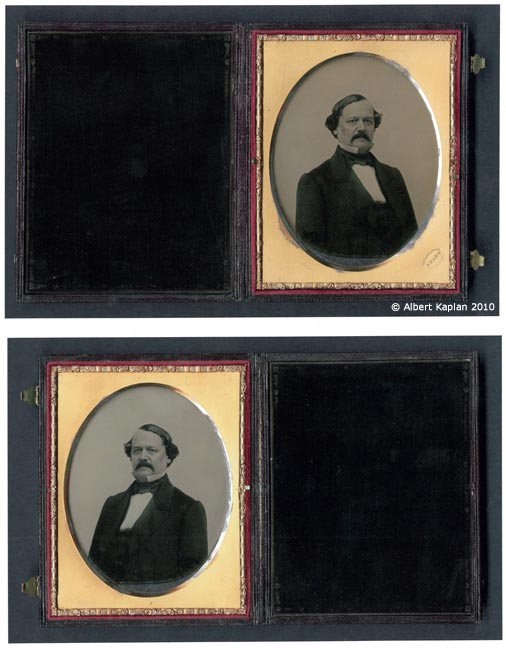 Upon viewing this half plate ambrotype, one can appreciate Matthew Brady’s preeminent position amongst the photographers of that era.  It is, in all respects, a supremely high quality ambrotype.

The date imprinted on the Brady stamp is 1854, and refers to the patent covering the mechanics of this and other similar ambrotypes.

Proclamation by the Confederate President

I. The following proclamation of the President is published for
the information and guidance of all concerned therein:

BY THE PRESIDENT OF THE CONFEDERATE STATES.

Now therefore, I Jefferson Davis, President of the Confederate States of America, and in their name do pronounce and declare the said Benjamin F. Butler to be a felon deserving of capital
punishment. I do order that he be no longer considered or treated simply as a public enemy of the Confederate States of America but as an outlaw and common enemy of mankind, and that in
the event of his capture the officer in command of the capturing force do cause him to be immediately executed by hanging; and I do further order that no commissioned officer of the United
States taken captive shall be released on parole before exchange until the said Butler shall have met with due punishment for his crimes.

And whereas the hostilities waged against this Confederacy by the forces of the United States under the command of said Benjamin F. Butler have borne no resemblance to such warfare as is alone
permissible by the rules of international law or the usages of civilization but have been characterized by repeated atrocities and outrages, among the large number of which the following may be cited as examples:

Peaceful and aged citizens, unresisting captives and non-combatants, have been confined at hard labor with balls and chains attached to their limbs, and are still so held in dungeons and fortresses. Others have been subjected to a like degrading punishment for selling medicines to the sick soldiers of the Confederacy.

The soldiers of the United States have been invited and encouraged by general orders to insult and outrage the wives, the mothers and the sisters of our citizens.

Helpless women have been torn from their homes and subjected to solitary confinement, some in fortresses and prisons and one especially on an island of barren sand under a tropical sun; have
been fed with loathsome rations that had been condemned as unfit for soldiers, and have been exposed to the vilest insults.

Prisoners of war who surrendered to the naval forces of the United States on agreement that they should be released on parole have been seized and kept in close confinement.

Repeated pretexts have been sought or invented for plundering the inhabitants of the captured city by fines levied and exacted under threat of imprisoning recusants at hard labor with ball and chain.

The entire population of the city of New Orleans have been forced to elect between starvation, by the confiscation of all their property, and taking an oath against conscience to bear allegiance to the invaders of their country.

Egress from the city has been refused to those whose fortitude withstood the test, even to lone and aged women and to helpless children; and after being ejected from their homes and robbed of
their property they have been left to starve in the streets or subsist on charity.

The slaves have been driven from the plantations in the neighborhood of New Orleans till their owners would consent to share the crops with the commanding general, his brother Andrew J. Butler, and other officers; and when such consent had been extorted the slaves have been restored to the plantations and there compelled to work under the bayonets of guards of U.S. soldiers.

Where this partnership was refused armed expeditions have been sent to the plantations to rob them of everything that was susceptible of removal, and even slaves too aged or infirm for
work have in spite of their entreaties been forced from the homes provided by the owners and driven to wander helpless on the highway.

By a recent general order (No. 91) the entire property in that part of Louisiana lying west of the Mississippi River has been sequestrated for confiscation and officers have been assigned to duty with orders to “gather up and collect the personal property and turn over to the proper officers upon their receipts such of said property as may be required for the use of the U.S. Army; to collect together all the other personal property and bring the same to New Orleans and cause it to be sold at public auction to the highest bidders”–an order which if
executed condemns to punishment by starvation at least a quarter of a million of human beings of all ages, sexes and conditions; and of which the execution although forbidden to military
officers by the orders of President Lincoln is in accordance with the confiscation law of our enemies which he has directed to be enforced through the agency of civil officials. And finally the African slaves have not only been excited to insurrection by every license and encouragement but numbers of them have actually been armed for a servile war–a war in its nature far exceeding in horrors the most merciless atrocities of the savages.

And whereas the officers under the command of the said Butler have been in many instances active and zealous agents in the commission of these crimes, and no instance is known of the
refusal of any one of them to participate in the outrages above narrated;

And whereas the President of the United States has by public and official declaration signified not only his approval of the effort to excite servile war within the Confederacy but his
intention to give aid and encouragement thereto if these independent States shall continue to refuse submission to a foreign power after the 1st day of January next, and has thus made known that all appeals to the laws of nations, the dictates of reason and the instincts of humanity would be addressed in vain to our enemies, and that they can be deterred from the
commission of these crimes only by the terms of just retribution:

Now therefore I, Jefferson Davis, President of the Confederate States of America and acting by their authority, appealing to the Divine Judge in attestation that their conduct is not guided by
the passion of revenge but that they reluctantly yield to the solemn duty of repressing by necessary severity crimes of which their citizens are the victims, do issue this my proclamation,
and by virtue of my authority as Commander-in-Chief of the Armies of the Confederate States do order–

1. That all commissioned officers in the command of said Benjamin F. Butler be declared not entitled to be considered as soldiers engaged in honorable warfare but as robbers and criminals
deserving death, and that they and each of them be whenever captured reserved for execution.

2. That the private soldiers and non-commissioned officers in the army of said Butler be considered as only the instruments used for the commission of the crimes perpetrated by his orders and
not as free agents; that they therefore be treated when capture as prisoners of war with kindness and humanity and be sent home on the usual parole that they will in no manner aid or serve the
United States in any capacity during the continuance of this war unless duly exchanged.

3. That all negro slaves captured in arms be at once delivered over to the executive authorities of the respective States to which they belong to be dealt with according to the laws of said
States.

4. That the like orders be executed in all cases with respect to all commissioned officers of the United States when found serving in company with armed slaves in insurrection against the
authorities of the different States of this Confederacy.

In testimony whereof I have signed these presents and caused the seal of the Confederate States of America to be affixed thereto at the city of Richmond on this 23d day of December, in the year of our Lord one thousand eight hundred and sixty-two.

II. Officers of the Army are charged with the observance and enforcement of the foregoing orders of the President. Where the evidence is not full or the case is for any reason of a doubtful
character it will be referred through this office for the decision of the War Department.

1. The omitted section concerns the case of William B. Mumford of New Orleans, who was executed for pulling down a U.S. flag.

President Lincoln and Butler met privately a few days before the assassination. They spoke about returning the slaves to Africa. Both were certain of its necessity. Repartition to Africa would have been “the” hallmark of Lincoln’s contribution to world history.

Lincoln would have much preferred Butler to Johnson as his Vice-president. Political expediency gave the slot to Andrew Johnson, a southerner.

Butler was one of the jurors who decided the fate of the band of assassins.